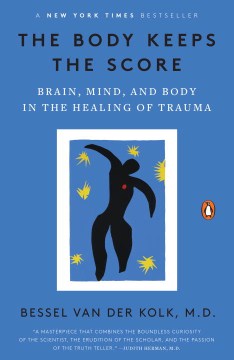 The Body Keeps the Score

Brain, Mind, and Body in the Healing of Trauma

Trauma is a fact of life. Veterans and their families deal with the painful aftermath of combat; one in five Americans has been molested; one in four grew up with alcoholics; one in three couples have engaged in physical violence. Dr. Bessel van der Kolk, one of the world's foremost experts on trauma, has spent over three decades working with survivors. In The Body Keeps the Score, he uses recent scientific advances to show how trauma literally reshapes both body and brain, compromising sufferers' capacities for pleasure, engagement, self-control, and trust. He explores innovative treatments--from neurofeedback and meditation to sports, drama, and yoga--that offer new paths to recovery by activating the brain's natural neuroplasticity. Based on Dr. van der Kolk's own research and that of other leading specialists, The Body Keeps the Score exposes the tremendous power of our relationships both to hurt and to heal--and offers new hope for reclaiming lives. -- From back cover.
Publisher: New York, New York : Penguin Books, 2015
Copyright Date: ©2014
ISBN: 9780143127741
0143127748
9780670785933
0670785938

Can't recommend this enough. Comprehensive on trauma, bodily effects, contrasting theories, and ways to cope. The way patients describe their pain is succinct and empathizing. If you want to understand how trauma affects us, start here.

I have learned a lot from this book which has many cases of patients. Body connects to brain and it remains years. Unfortunately happy childhood is not a common nowadays. If you are parents with children, make them happy and safe because they cannot choose parents.

This book has a lot of information - research, anecdotes, statistics, all of these things that have been screaming at me in the form of symptoms that my loved one has had for years, all of these things that, in the end, I can do nothing actually for besides becoming more understanding and patient. Psychological injury during traumatic childhood is real. Developmental trauma disorder is real, and it infuriates me that the diagnosis never made it into the DSM. Instead, we get to throw multitudes of other conditions and names at a person and leave them to list it all off, time after time after time.

I very much enjoy our good Dr. Van Der Kolk's style of speaking and storytelling; he seems like the caring professional I would love to have at my side in an investigation of the dark things. The stories he tells of those of his patients are extreme, and all too common. I came away from all of this with, at least, options and pathways to explore. I've recommended this work to several support groups already.

I'm on chapter 11 and emailed comments and bookmarks to email

Accessible, thorough, and human approach to the challenges of dealing with a population that suffers from traumatic experience. Dr Van der Kolk states that trauma and child abuse are at the heart of so many addictions, ailments, incarcerations...

well written from a compassionate perspective, with lots of scientific and medical studies as well as exploration of alternatives that successfully provide relief to sufferers. This and Judith Herman's "Trauma and Recovery" are two of the best works on the subject.

Amazing book. So good I bought if off Amazon for 8 bucks.

Bessel van der Kolk is my hero. Literally, he is fighting for me and others like me, and I sincerely love him for it. Thank you Bessel.

Knowledge is power and this book is chalked full of knowledge about how our minds and bodies store and process trauma throughout our lifespans. Van der Kolk helps us better understand ourselves and people around us, from the person in the check out line, to family members, to possibly those we work with in a professional setting as healers. It is written in a way that you do not need an advanced foundation in psychology or recovery to further understand how we all move through our suffering and scars day to day.

Excellent book. I highly recommend reading for anyone dealing with PSTD or any childhood disruptions. Real concrete understanding along with natural solutions. Finally a book that puts all the pieces of the puzzle together.

Great and wonderful updated understanding with a wide viewpoint.

Trauma affects the mind and body immensely and prevents those affected from living in the present. Van der Kolk, who has researched trauma since the 1970s, first became interested in trauma after meeting with Vietnam veterans who had a very hard time living their lives after returning from the war. They would become very angry, numb to their regular life, and unable to leave behind traumatic moments that occurred during war time. Van der Kolk was instrumental in identifying posttraumatic stress disorder (PTSD) and creating strategies to help those afflicted by it.

Van der Kolk also realized that there are millions of people affected by trauma in their everyday lives, especially children. For example, one in five Americans were molested as children, and one in four people living in the United States has an alcoholic parent. Through work with these people, van der Kolk identified another trauma based disorder, Developmental Trauma Disorder (DTD). Van der Kolk wrote this book, in part, to argue for the inclusion of DTD in the Diagnostic and Statistical Manual of Mental Disorders (DSM VI).