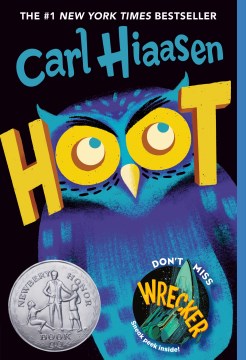 Unfortunately, Roy's first acquaintance in Florida is Dana Matherson, a well-known bully. Then again, if Dana hadn't been sinking his thumbs into Roy's temples and mashing his face against the school-bus window, Roy might never have spotted the running boy. And the running boy is intriguing: he was running away from the school bus, carried no books, and–here's the odd part–wore no shoes. Sensing a mystery, Roy sets himself on the boy's trail. The chase introduces him to potty-trained alligators, a fake-fart champion, some burrowing owls, a renegade eco-avenger, and several extremely poisonous snakes with unnaturally sparkling tails.Roy has most definitely arrived in Carl Hiaasen's Florida.
Publisher: 2002
ISBN: 9780375890277
Characteristics: 1 online resource

Hoot is an awesome book about friendship and the unbelievable greed from people in this world. The owls living under ground are a perfect example of what people would destroy for money. I read it in fifth grade and let me warn you that there were some swear words in this book but it helps the reader relate to back then because back then, that language was okay. But yes, a definite must read.

The book “Hoot” is a fantastic choice for kids of all ages. Despite the general recommendation from the author of children from 9 to 12, the storyline and writing are suitable for all ages. Without coming on too strong, the book tells a story with multiple strong elements in it, and eventually, they all tie together very strongly. The book talks about several important themes in the modern world, like animal cruelty and corporate greed, but does it in a way that succeeds in both delivering the ideas lightly and introducing new readers into the new, more advanced themes. There are emotional highs and lows in the book, and it delivers a well-written ending that finishes the intertwined storylines very well and leaves the reader satisfied. Overall, this book is one of the best books that I have ever read and is a choice that is worth it for sure. I give this book a rating of 5/5, and I highly recommend it to anyone that is either beginning to branch into higher-level literacy, to high-level readers looking for something fun and well-done! @wlgcwm of the Hamilton Public Library Teen Review Board.

An okay read. I do like the fact that it exposes kids to environmental issues. Our library shelves this in the Young Adult section, and in some ways it fits there - the environmental slant of the story, especially the concept of the Environmental Impact Statement. But overall, I felt like this was geared more toward younger kids, with the bully and the classmate who does fake fart sounds, etc.

Very interesting story about these tiny owls that live in holes in the ground in Florida, and how fragile their habitat is.

What a great book! But a bad movie

i really loved this book it was action packed, and full of adventure!

thevales thinks this title is suitable for 10 years and over

green_tiger_1721 thinks this title is suitable for 9 years and over

blue_dolphin_3839 thinks this title is suitable for All Ages

Violet_Jellyfish_30 thinks this title is suitable for 8 years and over

violet_monkey_760 thinks this title is suitable for 10 years and over

One day when Roy was riding a school bus and when he looked out through the window, he saw a boy running without shoes. He was trying to find out who the boy was. With the help of Beatrice ( she going to the same school as Roy...) Roy found out who was the running boy was and saved some cute, little animals.

“Roy remembered the time he and his father had a talk about fighting. 'It's important to stand up for what's right,' Mr. Eberhardt had said, 'but sometimes there's a fine line between courage and stupidity.”
― Carl Hiaasen

Roy Eberhardt just moved to Florida in the town Coconut Cove, and is being bullied by Dana Matherson. One day on the bus, Roy sees a boy running away from the bus barefoot. He tries to get off the bus, but his bully Dana grabs him by the throat. Roy gets free by breaking Dana's nose, but cannot catch the running boy and is hit in the head with a golf ball. Roy was sent to the vice-principal's office and the vice-principal suspends Roy from the bus for two weeks and tells him to write an apology letter to Dana. He tries to call a truce with Dana, but Dana refuses.
Mother Paula's All-American Pancake House Corporation intends to build a pancake house in Coconut Cove. The bulldozers have already been parked on the construction site,but work is delayed over and over again because of bizarre but effective acts of vandalism that occur in the night. Roy learns this is the work of the running boy he only knows as "Mullet Fingers", whom he befriends (his step-sister happens to be Beatrice Leep). His motives for the vandalism are honorable; Mullet Fingers wants to save the endangered burrowing owls that live on the site from being killed when the bulldozing begins.
The construction foreman on the site denies the existence of the owls. Roy attempts to help Mullet Fingers prove the owls are on the site, including loaning him a digital camera. In his current events presentation, Roy tells his history class about the owls and how the pancake company will bury them, and encourages them to join him in protesting at the ground breaking the next day.
Roy and Beatrice and other students attend the ground breaking, where they expose the company's greed and dishonesty to the entire town. The young people succeed in exposing the illegal acts of those in power, including illegally removing an environmental impact statement from the official file. They save the birds and their habitat. The president of Mother Paula's All-American Pancake House blames former employees and promises to preserve the property as an owl sanctuary.
Mullet Fingers, in an effort to escape his vile family situation, climbs out of a bathroom window and is accidentally mistaken for a burglar. When Mullet Fingers' mother spitefully tells the police that he stole a ring from her, he is sent to the same juvenile detention center as Dana. Mullet Fingers escapes the jail using Dana as a distraction. At the end, Roy discovers that Mullet Finger’s real name is Napoleon Bridger.

Roy moves to a small Florida community, only to find a small mystery unfold.

Coarse Language: just a warrning to parents of younger children not for below the age of 9

Coarse Language: Not really,but a few unappropriate words only for ages 10-14.

“Roy remembered the time he and his father had a talk about fighting. 'It's important to stand up for what's right,' Mr. Eberhardt had said, 'but sometimes there's a fine line between courage and stupidity.”
― Carl Hiaasen