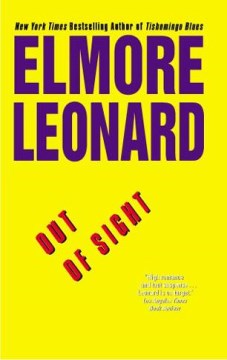 Foley was a celebrity hard-timer who’d robbed more banks than they’d been in to cash a check.
===
Karen Sisco, twenty-nine, was a deputy United States marshal, recently transferred from Miami to the West Palm Beach office. She had worked surveillance jobs for her dad while in college, ... and transferred to Florida Atlantic in Boca Raton to take their criminal justice program.
===
"... I don’t mean the place where some of Nixon’s people went, Haldeman, some of those guys. That was Lompoc FPC, federal prison camp, the one they used to call Club Fed. No fence, no guys with shanks or razor blades stuck in toothbrush handles. The worst that could happen to you, some guy hits you over the head with a tennis racquet.”
===
She picked up the phone and dialed a number. “Dad? Karen. Will you do me a big favor?” “Do I have to get up? I just made myself a drink.”

“Everybody thought the guy was a genius,” Foley said, “till they found out he made it the old-fashioned way, he stole it.”
===
... titles. He told them he’d spot the car a customer wanted and use a slim jim or lemon pop to get in, a slap hammer to yank the ignition, a side kick to extract steering column locks and usually liquid nitrogen to freeze the alarm system. See if that impressed them.
===
"... he asks if she’ll do him a favor? And she says, ‘Have I ever denied you anything?’”
===
"... I’m forty-seven years old and I’m not doing any more time.” Karen said, “You’re sure about that?” “If I go back I do a full thirty years, no time off. Could you imagine looking at that?” “I don’t have to,” Karen said, “I don’t rob banks.” “If it turns out I get shot down like a dog it’ll be in the street, not off a goddamn fence.”

“Biscuits and redeye gravy?” ... “I don’t care for the gravy. What I like to do is crumble up my bacon in the grits.”
===
... the old ladies and a few skinny old guys sitting around the lobby. ... They’re outside on the patio, they’re in the lobby, they’re like birds sitting on a telephone line watching everything that’s going on.
===
“You’re a better man than I am, Gunga Din. Bust out one day and back to work the next.”
===
“You’re too late, Jack. You’re what you are, clean or dirty. The best either of us can do is look at nice pretty girls and think, well, if we had done it different . . .”
===
No fence, no gun towers. The only thing to stop anybody from leaving is a sign that says Off Limits.

... a sign above the ring on the other side that said turn up the heat. Another one, the bigger the reward the bigger the sacrifice. Glenn stared at it a few moments thinking it should be turned around, ...
===
"... Your friends are at the mall, you’re home watching the fights.” “Well, once in a while I did. And soaps,” Karen said. “General Hospital, I almost became a nurse.”
===
“The FBI has warrants right now for over six thousand fugitives. What do they need two more for?”
===

“I always liked nuns. They’re so clean. They never seem to sweat.”
===
She could do rope tricks: cut and restore, threading the needle, the coat-escape using volunteers. She could do handkerchief tricks: Fatima the dancer, the serpentine silk, the dissolving knot. She could do card tricks: the Hindu shuffle, overhand shuffle, the doubt lift, the glide . . . She could do sealed envelopes: the Gypsy mind reader, impossible penetrations . . .

“The engine comes down the line, let’s say it’s for an automatic. Okay, I take this brace in my left hand— it’s hanging from a track— work the hoist button with my right hand, get it in position so the pins in the brace line up with the holes they have to fit into in the transmission, jockey it around . . .”
===
For a big industrial city like Detroit there were so few people on the streets. Sunday, Buddy said it was because it was Sunday and everybody was home watching the game. Today was Tuesday, there still weren’t many people walking around downtown. You could count them, Foley said. Buddy said he didn’t know, maybe they built the freeways and everybody left town.
===
“You wanted to tussle,” Karen said, “we tussled.”
===

I asked him how come they don’t have fights at Joe Louis Arena. He said they do, it’s where the Wings play hockey.

He liked this kind of movie. You could think about it after, when you had nothing to do, try to figure out what the movie was about.
===
... both real guys who seemed tired of who they were, but couldn’t do anything about it. Stuck, putting up with their lives the way people find themselves in jobs they care nothing about, but in time have nowhere else to go.
===
Karen hadn’t been to confession because she seldom felt guilty about anything. If she had doubts, she would talk to her dad about it. Or, she would imagine talking to her dad, which to Karen was much the same thing.
===
“You told me out on the highway it was too late, you know, to have a regular life. I knew that. I still wanted to know what might’ve happened if things were different.”

... he felt, that these were the final scenes of his life playing out, that pretty soon it would be over and he was resigned to it happening. Here, not against the fence in some penitentiary. It was like if Clyde Barrow, driving along that county road in ’34, knew he was going to run into all those Texas Rangers and there was nothing he could do about it. How did you explain that kind of feeling to anybody?
===
Foley listening to sociopaths offering their credentials, misfits trying not to sound like losers, Foley realizing, shit, here was just a little more of what most of his life had been. He would hear Buddy make quiet comments that were meant to zing but fell flat, the same old same old, that stand-up talk you heard in the yard, but nobody here bothering to listen, busy thinking of what they’d say next. All us tough guys, Foley thought.

Have not seen the film yet but plan to. Judging from the book, should be a fun watch. After a well planned jail break, Elmore took his time to build up the eclectic criminal characters and exploded in the last few chapters into the nth degree mayhem. In between, readers are treated to an unlikely sweet fairy-tale of a romance, a tour of Detroit in the winter, old time auto assembly and its boxing scenes. Not as good as Mr. Majestyk or Rum Punch but what is?

The movie was better!