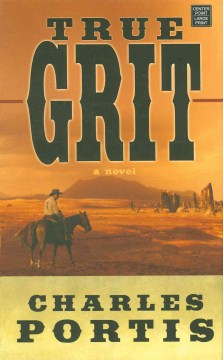 "True Grit" by Charles Portis is a superb fictional treatment of the Old West, set in the state of Arkansas and the Indian Territory (later the state of Oklahoma) during the administration of President Rutherford B. Hayes (1877-1881). The story follows the tale of Maddie Ross, a 14 year old girl from a more "civilized" region of Arkansas as she arrives in Fort Smith on a mission to avenge her father's killing at the hands of a former employee, Thomas Cheney. Maddie Ross serves as the narrator for the whole tale, her bemused and sometimes cynical/practical view of the world adds humor to the narrative. Maddie's narration is set in the 1920s, far removed from events, and she is telling her story in retrospect, as a comfortable and wealthy bank owner. Maddie eventually recruits the aid of two gunslingers/lawmen to help her, an alcoholic and violent US Marshal named Reuben "Rooster" Cogburn and a egotistical and self-important Texas Ranger named LaBouef (pronounced La Beef). In addition to the two lawmen they run into a cast of secondary and tertiary characters such as the members of the Lucky Ned Pepper Gang and members of the Choctaw Light Horse (Indian Police). All of these characters feel fully rounded despite only having met them and their role in the narrative brief. The magic of Portis, is that everything and everyone has a role in the story. The backstory of Cogburn and LaBouef is fleshed out in the narrative and adds continuous depth to the story. Maddie includes observations of the infamous Judge Isaac Parker's federal court, life in the Indian Nations, the violent history of the region's Bushwhackers, and life on the frontier. Portis does a great job of portraying a world where the Wild West and the Old Confederacy come together creating a strange melting pot of ideas and social customs.

True Grit is about a girl named Mattie Ross, who is surprisingly young, considering the circumstances. She is on a mission: to avenge her father's death at the hands of a particular Tom Chaney. With a federal marshal named Rooster Cogburn and a Texas ranger going by LaBoeuf, she follows Chaney into dangerous territory. She is going to see him killed, either tried and hanged or with her own bullet in his head.
The plot is interesting enough and contains a good bit of action, especially near the end. I have to say it is a pretty good book, although there are a few issues.
True Grit has been accoladed for its compelling plot and humor, although I have found that it lacks in both departments. The excitement does not begin until well into the book as the first chapters are spent setting up the plot and characters. This translates to an excruciatingly long and tedious start as the author tries to shape Mattie into a headstrong young woman lacking proper judgment and Rooster into a trigger-happy drunkard. The humor is a similar story. Reviews praise True Grit's "dry wit" and "deadpan humor," but I don't see much difference between this book and others that I have read.
The language used in True Grit is also unfriendly to the reader. The majority of events take place in the late 1800s; the dialogue reflects that of the period. Although this injects some level of authenticity and believability to the book, readers are forced to google unfamiliar words and phrases as they read, distracting from the story and leaving certain parts unclear. A glossary would have been helpful, as most of these colloquialisms are not present in modern dictionaries.
I think it's clear that westerns aren't for me, but if you're interested, go ahead and try it.

This book is my favorite! I've read it a million times and could read it another million more! It will keep you rooting for Mattie the whole way through! My favorite characters are her and Rooster:) WARNING: if you start reading this you will not be able to put the book down until you have read the entire thing! (including the afterward) I have read it so many times but this still happens to me-even though I know the whole plot by heart! I've placed the movie of it (with John Wayne of course!!!) on hold and can't wait to watch it! Happy reading!

Portis' most famous novel set in the old west and featuring a strong, perceptive, and straight-talking young heroine named Mattie Ross. The dialogue is told in the vernacular of the time and the comedic timing is pitch perfect while a looming sense of threat and danger gives the novel weight and movement. All the characters are interesting, flawed, and evolving as are the relationships between them. Both movie adaptations are good but the book is far better. This is one of my all time favorite novels.

A quick read, and funny.

Mattie's adventures have made for great book club discussions. This classic is filled with energy, dry humor, and a healthy dose of sass. If you are interested in trying out a Western, I'd start with this one as well as a contemporary title, 'News of the World' by Paulette Jiles.

Don't like "westerns"? You're missing out! Young Mattie hires a cowboy with "true grit" to help her avenge her father... but no one has as much grit as our young heroine. Fantastic story!

Unlike the usual, books-to-movies question of "Is the book better than the movie?" I kept getting asked "Which movie is better", as if the book didn't even deserve a seat at the table. For the record, the book, though pretty short, is every bit as good as either of the movies.

A book that can be read and re-read. All the characters are smart (even the “dumb” ones), and these characters are lively, coming off the page and filling the imagination. Top notch. Highly recommended. The two movies made from this book are terrific, but the book outdoes them.

This classic western novel features Mattie Ross, a sassy and over-confident 14-year-old girl who sets out to seek revenge against the low-life criminal who killed her noble father. This classic book is full of dead-pan humor, and Mattie is an iconic American character, much along the lines of Huckleberry Finn or Scout Finch. But, frankly, the book felt a bit dull and dusty.

“Rooster said, "Fill your hand, you son of a bitch!" and he took the reins in his teeth and pulled the other saddle revolver and drove his spurs into the flanks of his strong horse Bo and charged directly at the bandits. It was a sight to see. He held the revolvers wide on either side of the head of his plunging steed. The four bandits accepted the challenge and they likewise pulled their arms and charged their ponies ahead.”

“You can expect that out of Federal people and to make it worse this was a Republican gang that cared nothing for the opinion of the good people of Arkansas who are Democrats.”

“I will go further and say all cats are wicked, though often useful”

"Men will live like billy goats if they are let alone.” Mattie Ross

"I always go backwards when I am backing up.” Rooster Cogburn

“I know what they said even if they would not say it to my face. People love to talk. They love to slander you if you have any substance.” Mattie Ross

“There is no knowing what is in a man's heart.”

“If you want anything done right you will have to see to it yourself every time.” Mattie Ross

"People do not give it credence that a fourteen-year-old girl could leave home and go off in the wintertime to avenge her father's blood but it did not seem so strange then, although I will say it did not happen every day."

GreaterChicken thinks this title is suitable for 12 years and over

blue_dog_17792 thinks this title is suitable for 13 years and over

ryascon thinks this title is suitable for 11 years and under

hcbrandley thinks this title is suitable for 12 years and over

marishkajuko thinks this title is suitable for 14 years and over

Everyone knows the plot of this novel, I expect the Coen Brothers movie to be better than this good novel.