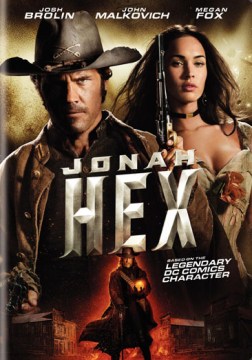 Having survived death, Jonah's violent history is steeped in myth and legend and has left him with one foot in the natural world and one on the 'other side.' His one human connection is with Lilah, whose life in a brothel has left her with scars of her own. But Jonah's past catches up with him when the U.S. military makes him an offer he can't refuse: to wipe out the warrants on his head, he must hunt and stop dangerous terrorist Quentin Turnbul.
Publisher: Burbank, CA : Warner Home Video, c2010
ISBN: 9781419879289
1419879286

So horrible. John Malkovich, Megan Fox and Josh Brolin in a less fun stinker than Will Smith's Wild Wild West.

I have seen other films based on comics. “Jonah Rex” just didn’t appeal to me. I’m not familiar with this character and so I am giving it the benefit of the doubt. On a more positive note, there are a few scenes that are truly beautiful works of art.

Not really familiar with this comic book character and didn't care much for the movie. If your a Megan Fox fan this movies for you.

Fairly good B movie. Quite violent. The movie is more of a live action comic book.

This movie was entertaining and interesting but not one of my favorite for this year. “Not too bad---good performance”. "I fast forwarded a lot but not all the way.”

Pretty horse! Pretty Megan Fox! (see the deleted scenes for more of both). I was astonished that Hex gets dead bodies to talk to him, I had no idea what the story was about (Hex wakes up his best friend, who he killed himself in one of those civil war brother-vs.-brother situations, and his friend is pretty cool about it, as I'm sure my best friend would be...um, not). Actingwise, Michael Fassbender (!!) steals the show from John Malkovich (!), but Malkovich makes him work for it. Overall, it's just like "Cowboys and Aliens" only better, doesn't leave you with that dirty feeling at the end. I also approve of the music, half heavy metal, half civil war songs, there's a combination you don't get everyday. It's a far better movie than all the other comicbook movies I've seen: Spiderman, Hulk, IronMan, Thor. (No, not better than Batman-Dark-Knight, be realistic). Oh, and although the story is violent, the movie avoids being gross, I'm not a parent but I figure your kids could watch it.

I was looking forward to this but it turned out a bit B-grade. Decent action sequences, but zero plot, no character development, and a surprisingly flat performance by John Malkovich. On a par with Ghost Rider?

Tried to watch this twice. Kept falling asleep, despite all the shooting and lame action sequences. I really love comic book films, but this one is pretty bad. And Megan Fox is terrible.

Good actions and with a little supernatural comic-book drama. If you enjoy Pale Rider or other Clint Eastwood's spagetti westerns, you'll like this..

Wow, I had such high hopes for this movie, and although it was not as bad as some people say it is, it is really not all that good. I think the main problem is they made an action movie set in the west instead of making a western with some action in it, and then add in the supernatural stuff that is not accurate to the character and it just doesn't work. Also, although I don't think Josh Brolin did a terrible job, I think both Nathan Fillion and Thomas Jane, who were also up for the roles at one point, would have done a better job. Lastly, I think it is a sure sign that when Megan Fox is doing the best acting in the movie that something is not right, heck this movie even had Michael Fassbender, but he was mediocre in it too. It is just a real shame, this could have been great, but for the most part it comes off as a remake of Wild Wild West, which I think we can all agree, is never a good thing.
2 Beards Out Of 5

Loading...
No similar edition of this title was found at SJCPL.

Try searching for Jonah Hex to see if SJCPL owns related versions of the work.