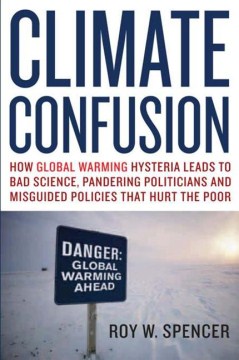 Baker & Taylor
A climatologist argues that current concerns about global warming have been exaggerated and are driven by politics, rather than true scientific evidence, and demonstrates how increasing wealth and technological know-how hold the key to solve environmental problems.

Perseus Publishing
The current frenzy over global warming has galvanized the public and cost taxpayers billons of dollars in federal expenditures for climate research. It has spawned Hollywood blockbusters and inspired major political movements. It has given a higher calling to celebrities and built a lucrative industry for scores of eager scientists. In short, ending climate change has become a national crusade. And yet, despite this dominant and sprawling campaign, the facts behind global warming remain as confounding as ever. In Climate Confusion, distinguished climatologist Dr. Roy Spencer observes that our obsession with global warming has only clouded the issue. Forsaking blindingly technical statistics and doomsday scenarios, Dr. Spencer explains in simple terms how the climate system really works, why man's role in global warming is more myth than science, and how the global warming hype has corrupted Washington and the scientific community. The reasons, Spencer explains, are numerous: biases in governmental funding of scientific research, our misconceptions about science and basic economics, even our religious beliefs and worldviews. From Al Gore to Leonardo DiCaprio, the climate change industry has given a platform to leading figures from all walks of life, as pandering politicians, demagogues and biased scientists forge a self-interested movement whose proposed policy initiatives could ultimately devastate the economies of those developing countries they purport to aid. Climate Confusion is a much needed wake up call for all of us on planet earth. Dr. Spencer's clear-eyed approach, combined with his sharp wit and intellect, brings transparency and levity to the issue of global warming as he takes on wrong-headed attitudes and misguided beliefs that have led to our state of panic. Climate Confusion lifts the shroud of mystery that has hovered here for far too long and offers an end to this frenzy of misinformation in our lives. --This text refers to the Hardcover edition.

Book News
Spencer (principal research scientist, U. of Alabama) is skeptical of fears that anthropogenic global climate change is threatening disaster. Suggesting that these environmental fears stem from the belief that the Earth is fragile and needs to be protected and that "the increasing wealth of nations is bad for the environment," he argues the opposite: that the Earth is resilient and that environmental problems are best addressed "through mankind's ingenuity and freedom to create wealth." He spends a little time arguing that the climate system tends to stabilize itself against the warming influence of greenhouse concentrations but mostly spends time discussing his views on the politics and economics of the global warming debate, which he suggests has been unduly influenced by left-wing foundations and other actors while further contending that one's view of the science is largely a product of one's views on economics. Annotation ©2008 Book News, Inc., Portland, OR (booknews.com)

Baker
& Taylor
Argues that concerns about global warming have been exaggerated and are driven by politics, rather than true scientific evidence, and demonstrates how increasing wealth and technological know-how hold the key to solving environmental problems.
If you listen to the media, you would think that man-made environmental catastrophe was about to engulf the world and imperil civilization. From Al Gore's An Inconvenient Truth to nightly jeremiads about CO2 emissions and carbon footprints, we are bombarded around the clock with alarmist reports that disasterous global warming is on the rise and that it's our fault. In Climate Confusion, noted climatologist Roy Spencer shows that fears about global warming are vastly exaggerated and are driven by politics, not truth. He shows that a global superstorm has already arrived--but it is a storm of hype and hysteria. Climate Confusion is a ground-breaking book that combines impeccable scientific authority with great wit and literary panache to expose the hysteria surrounding the myths of global warming and climate change. Spencer shows that the earth is far more resilient than exopessimists pretend and that increasing wealth and technology ingenuity, far from being the enemies of the environment, are the only means we possess to solve environmental problems as they arise.--Provided by the publisher.

I think it is important to keep a balanced perspective on this issue and to continue examining new information as it comes in. The book was an excellent read and the information needs to be considered thoughtfully. Funny that no one has ever thought about the positives of global warming. Increased CO2 levels are actually greening the planet as per satellite imagery. I have also been tracking severe storms in Alberta over the past 5 years as an amateur meteorologist and member of the Weather Networks Severe Weather Team, and have noticed a significant decline in the severity of thunderstorms due to a weakening jet stream. This is hardly mentioned in the media. What about expanding crop growing seasons? And tell me what is better global warming or global cooling? It may be even worse if a thick sheet of glacial ice covers the continent. There would be no chance of survival then! Lol! At the end of the day let's all keep a balanced perspective and keep learning from both sides and encourage all voices to be heard. Let's not muzzle or ridicule any scientist no matter how emotional the topic or how much we may disagree with the theory presented.

"On December 2, 2009, the Cornwall Alliance issued
"An Evangelical Declaration on Global Warming", wherein they say,

"We believe Earth and its ecosystems – created by God’s intelligent design and infinite power and sustained by His faithful providence – are robust, resilient, self- regulating, and self-correcting, admirably suited for human flourishing, and displaying His glory. Earth’s climate system is no exception. Recent global warming is one of many natural cycles of warming and cooling in geologic history."

"Most scientists" does not include:
Richard S. Lindzen
Alfred P. Sloan Professor of Atmospheric Sciences, MIT (Massachusetts Institute of Technology)

Funny, but I never thought science had sides. But I guess it does make sense: the right (no pun intended) and the wrong side! As for the author, Dr. Roy Spencer, he is a respected scientist, with a Ph.D. in meteorology, who also worked (and continues to work) for NASA and is a Principal Research Scientist at the University of Alabama. He received a received the Exceptional Scientific Achievement Medal for global temperature monitoring work with satellites from NASA. He has provided testimony to Congress in several occasions about "global warming" and his research has been supported by NASA, NOAA, and DOE. (You get the picture: the guy is an ignoramus!) Spencer also wrote two other excellent books: "The Great Global Warming Blunder: How Mother Nature Fooled the World's Top Climate Scientists" and "The Bad Science and Bad Policy of Obama's Global Warming Agenda." If you are a serious student of "global warming," don't miss Bjorn Lomborg "The Skeptical Environmentalist." (And if you want real research, forget about Wikipedia!)

Most scientists now agree this author is WRONG.

EuSei thinks this title is suitable for All Ages

DebAK thinks this title is suitable for All Ages

ecrl thinks this title is suitable for All Ages