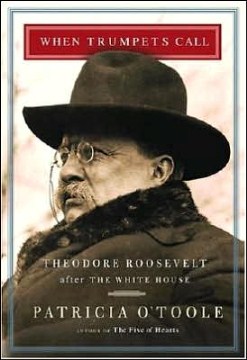 Theodore Roosevelt After the White House

Baker & Taylor
A look at the final ten years of Theodore Roosevelt's life describes how he went on safari after leaving the White House, strived for another presidential term, and worked to support Liberty bonds when the U.S. entered World War I.

Baker
& Taylor
An analysis of the final ten years of Theodore Roosevelt's life describes how he went on safari after leaving the White House, unsuccessfully strived for another presidential term, worked to support Liberty bonds when the U.S. entered World War I, and lost his son on Bastille Day. 60,000 first printing.

A remarkable portrait of one of our most remarkable presidents, When Trumpets Call focuses on Theodore Roosevelt's life after the White House. TR had reveled in his power and used it to enlarge the scope of the office, expand government's role in economic affairs, and increase U.S. influence abroad. Only fifty when he left the White House, he would spend the rest of his life longing to return.

Drawing from a wealth of new and previously unused sources, Patricia O'Toole, author of the highly acclaimed biography of Henry Adams and his friends, The Five of Hearts, conducts the first thorough investigation of the most eventful, most revealing decade of Roosevelt's life.

When he left office in March 1909, Roosevelt went on safari, leaving the political stage to William Howard Taft, the friend he had selected to succeed him. Home from Africa and gravely disappointed in Taft, he could not resist challenging Taft for the Republican nomination in 1912. When Taft bested him, Roosevelt formed the Bull Moose Party and ran for president on a third ticket, a move that split the Republican vote and put Woodrow Wilson in the White House.

In 1914, after the beginning of World War I, Roosevelt became the most vocal critic of Wilson's foreign policy, and two years later, hoping to oust Wilson, Roosevelt maneuvered behind the scenes in another failed bid for the Republican nomination. Turned down by Wilson in his request to raise troops and take them to France, TR helped his four sons realize their wish to serve, then pressured Washington to speed up the war effort. His youngest son was killed on Bastille Day, 1918. Theodore Roosevelt died six months later. His last written words were a reminder to himself to see the chairman of the Republican Party.

Surprising, original, deeply moving, When Trumpets Call is a portrait framed by a deeply human question: What happens to a powerful man when he loses power? Most of all, it is an unforgettable close-up of Theodore Roosevelt as he struggled not only to recover power but also to maintain a much-needed sense of purpose. Through her perceptive treatment of his last decade, Patricia O'Toole shows why Theodore Roosevelt still enjoys the affection and esteem of Americans across the political spectrum.

There are no comments for this title yet.

Loading...
No similar edition of this title was found at SJCPL.

Try searching for When Trumpets Call to see if SJCPL owns related versions of the work.