Saved Searches Advanced Search
All SJCPL locations are open for browsing and continued curbside pick-up.
Main Library is closed for renovation until Summer 2021. 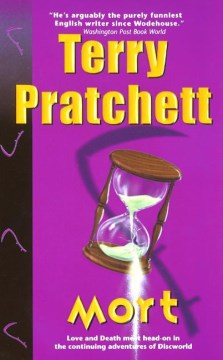 A Novel of Discworld

Beginning of the "Death" mini-series within the greater "Discworld" series. DEATH SPEAKS ONLY IN ALL CAPS, SO PLEASE KEEP THAT IN MIND. A great story about responsibility and impostor syndrome. Oh, and death goes on vacation.

Death has a horse named Binky? Who knew..... Death decides to go on vacation, chooses the most improbable of apprentices and then the fun begins. For those not acquainted with Terry Pratchett this is a great place to begin.

Fun early entry (#4) in the Discworld series. Death (capital D) has been working on the Discworld since its creation. It is his job to gather souls at death (small d) and pass them along to wherever they go. He doesn’t know; he doesn’t take sides; it’s just a job. He is good at it and you always know when he is speaking to you because he has the distinctive voice of FINALITY. (Pratchett’s Death always speaks in capital letter.) But he is dreadfully bored and thinks it is time for an apprentice, so he can take a break once in a while. He chooses a teenage boy suitably named Mort (short for Mortimer) to learn the ropes … or maybe “the scythe.”

After some training, Death turns the soul-gathering over to a not-quite-prepared-enough Mort. Death heads to a job service to look for something new to do, while Mort sets out for his collection duties. Unfortunately Mort determines that a beautiful princess should not be assassinated, so he prevents it from occurring, thereby creating two versions of Reality. Clever confusion ensues.

Not in the top tier of Discworld books, but entertaining.

Taking the comedically dramatic but clinically depressed character of Death, this new subseries of the larger Discworld franchise explores what might happen if Death decided to take on an apprentice. As you might expect, the young Mortimer (Mort, for short) finds a ways to bungle his new job spectacularly, threatening the universe itself while Death is busy trying to live a more "normal" life.

Would Death be happier as a fry cook in a restaurant? After he gets an apprentice, Death tries to find out because what could go wrong? In the meantime his apprentice Mort decides not to kill the princess, an act which could lead to the collapse of the universe. Then wizards get involved and, as anybody who has read Terry Pratchett's Discworld novels knows, that is not necessarily for the better. Enjoy!

I really enjoyed this book in the Discworld series, it was about Death and his new apprentice Mort and of course there are lots of shenanigans. It was funny, and I really enjoyed the character of Death in the other books so far, so it was cool to have a book just about him. Mort was interesting, I liked him as a character however his constant pining over a woman is slightly off putting. Over all it was a great read in the Discworld and I cant wait to read the next one in line.

My friend recommended this to me as it was his favourite book, and I am so happy he did. This is one of my all time favourite books, and it was a great introduction to the discworld universe for me.

Death is one of those characters that you can't help but like and be fascinated by. In the previous novels he is present, but here he is featured. Be ready to meet Death, and all his straightforward quirkiness, and his ever curious and meddling assistant, Mort. Both of these together produce a very humourous take on death's role in Fantasy.

This is, so far my favourite Discworld book. Who'd have thought that Death likes cats?

Entertaining in a "nibbling on a bowl of chips" kind of way - fun and feels good at the time.
I have a problem with the "Discworld" books in that there are no chapters to force me to stop reading and do something in my life.

Great read. One of my favourites

Your a young man coming up in the world and you need a job. Well this one's not found at most job fairs.